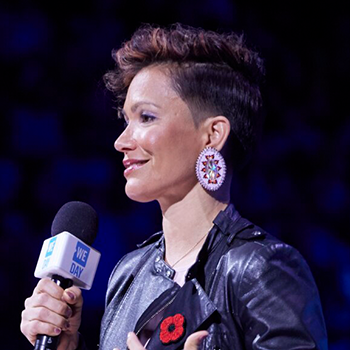 Similar to the arduous process of making wampum beads, the journey of Waneek Horn-Miller doesn’t begin and end with being an Olympic Water Polo athlete. A Mohawk from the Kahnawake Mohawk Territory near Montreal, Waneek was behind the lines during the Oka crisis in 1990 when she was stabbed by a Canadian soldier’s bayonet. It was a near-death experience that marked a turning point in her life. Waneek has overcome discrimination and violence to emerge as one of North America’s most inspiring female Indigenous speakers.

Her keynotes are aimed at bridging the gap and repairing relationships between Indigenous and non-Indigenous peoples. While she recently stepped down from her role as Director of Community Engagement for the MMIWG Inquiry to focus on her family, she continues support the goal of the Inquiry and advocates on Indigenous issues in other ways to help build healthy and prosperous communities. Waneek is an advocate for building Indigenous sport and has worked with the Assembly of First Nations to develop their sport, fitness and health strategy. Waneek travels extensively, speaking to Indigenous and non-Indigenous audiences on issues of reconciliation, sport and why we must all strive for our dreams.

Waneek is currently working with the Indigenous-forward company Manitobah Mukluks including as the Director of the Storyboot Project – a program that facilitates mukluk, moccasin and beading workshops from one generation to the next, while also supporting traditional Indigenous artists by selling their work worldwide, online.

As one of Canada’s few Indigenous Olympians, Waneek has used her unique experiences in life and sport combined with a passion for her culture to influence Indigenous and non-Indigenous leadership in sport and wellness, Indigenous business, women in business and community building. The Canadian Association for the Advancement of Women and Sport and Physical Activity recently named her one of Canada’s most influential women in sport.

“If we want reconciliation, for ourselves and our children, we need to have hard conversations, build common ground, and really listen to each other.”

Learn more about her keynote: Athletics to Activism; Resilience to Reconciliation