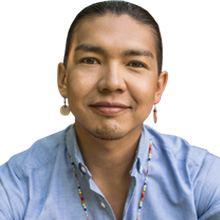 Dr. James Makokis is a Nehiyô (Neh-hee-yo) two-spirit physician from the Onihcikiskapowinihk (Saddle Lake Cree Nation) in Treaty Number Six Territory.  He practices Family Medicine in Kinokamasihk (Kih-no-kum-a-sick) Cree Nation in northeastern Alberta and has a transgender health-focused practice in South Edmonton. He was the inaugural Medical Director at Shkaabe Makwa (Shkaa-bay Muh-kwa) at the Centre for Addiction and Mental Health in Toronto - the first Indigenous health centre designed to lead systems' transformation in Indigenous mental health across the country. He is also an Associate Clinical Professor in the Department of Family Medicine at the University of Alberta.

In 2019, Dr. Makokis competed alongside his husband Anthony Johnson as "Team Ahkameyimok" (Ah-ka-may-mook) (Never Give Up in the Cree Language) on the Amazing Race Canada and won, becoming the first two-spirit, Indigenous, married couple in the world to do so. In 2020, Dr. Makokis was named one of the 30 most powerful physicians in the country by The Medical Post but believes power is a concept that should be shared amongst others. Dr. Makokis is a regular guest on the Marilyn Denis Show and a commentator in the media. Dr. Makokis is passionate about revitalizing the Nehiyô medical system, educating people about Treaty, and working toward the vision of Turtle Island, which is to live together in peace and friendship.